The Camera App and the Laser Training have the following requirements:
Limitations

Realistically Scaled Targets
Before you jump into dry firing, it is important to understand the relationship between screen size, screen distance and target distance. Sounds complicated, but it is easy! 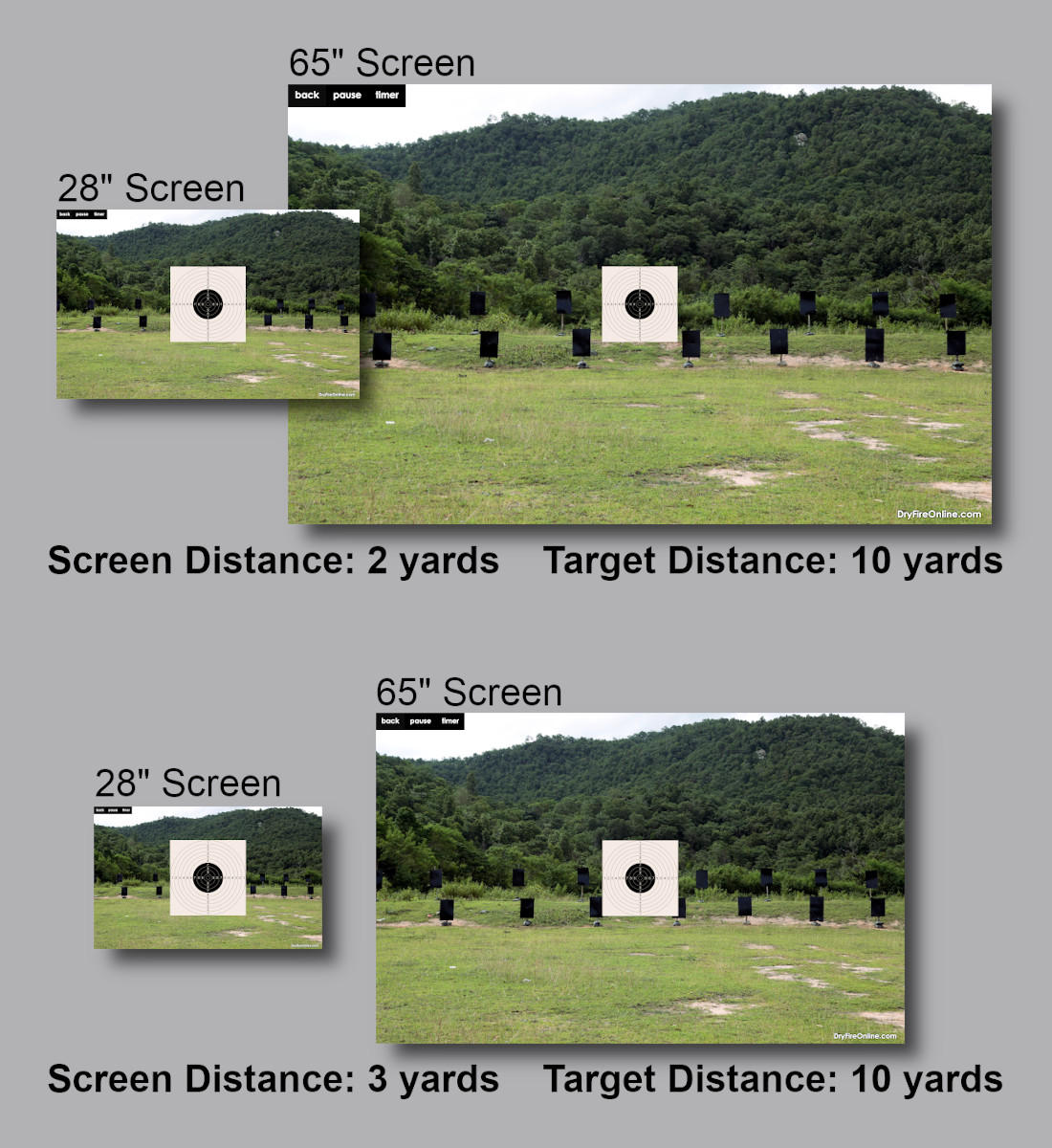 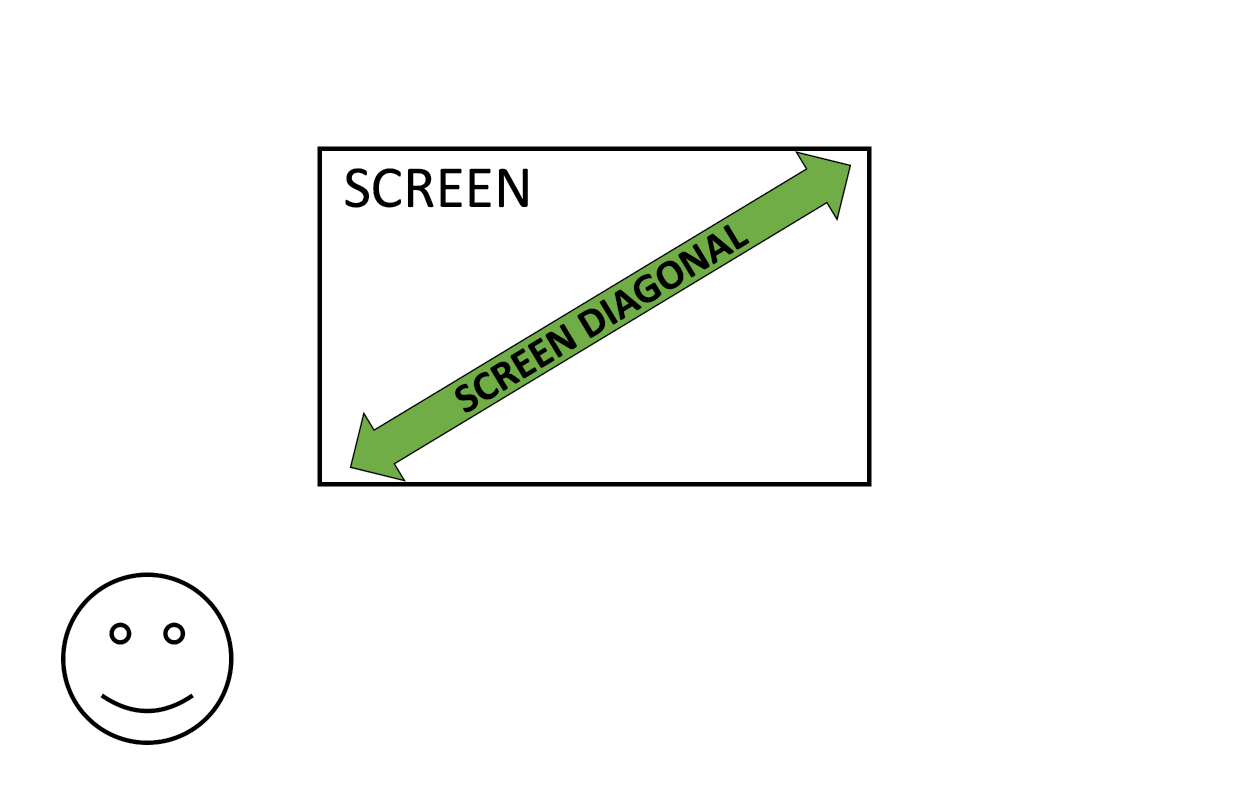 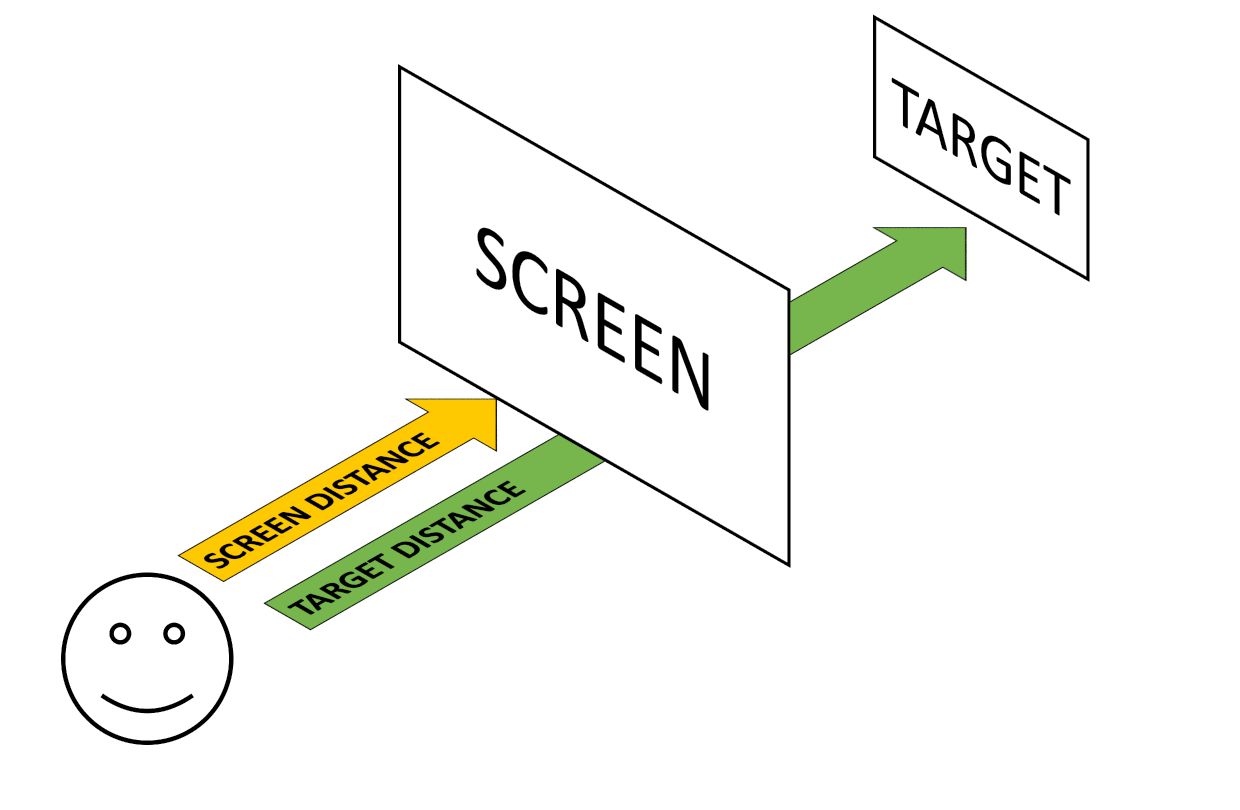 The screen distance is how far you stand from the screen. Note the following: 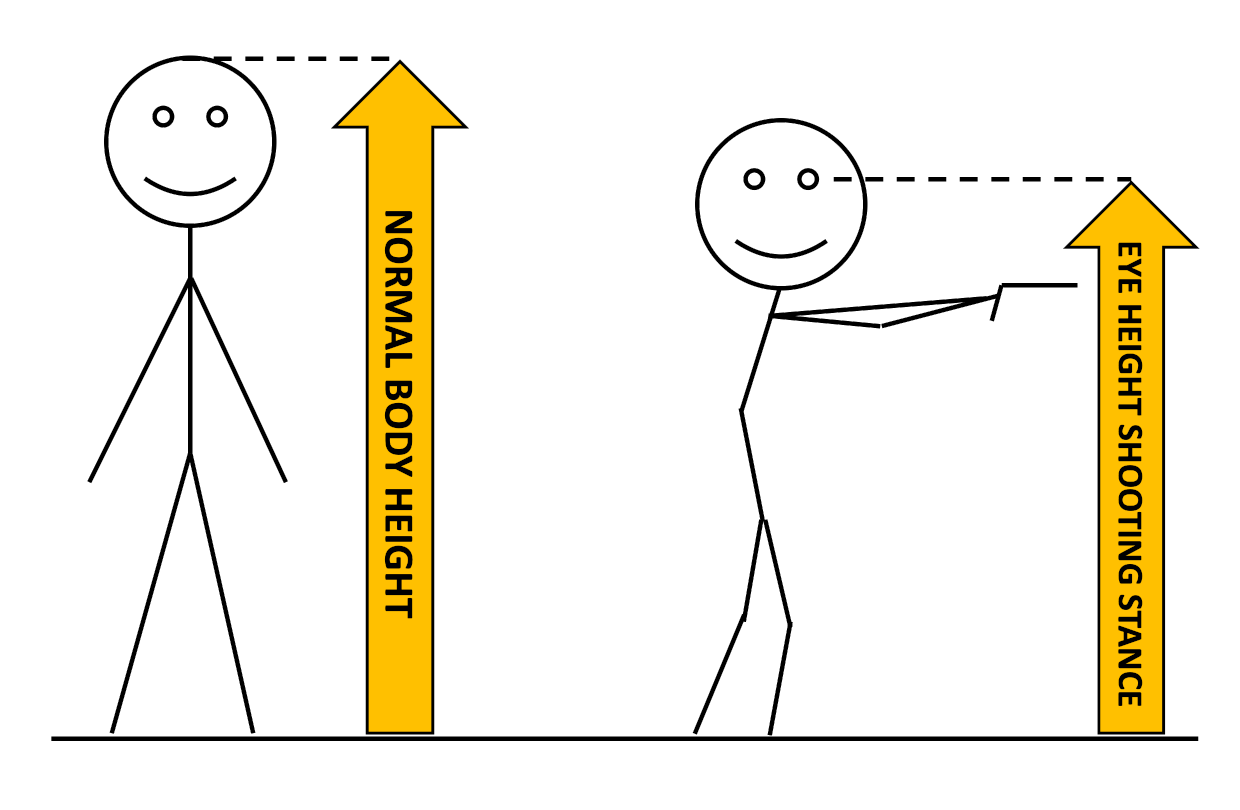 The ‘shooter eye height’ is ideally the height of your eyes (viewpoint, camera, whatever) from the ground. Note the following:

Set up the screen 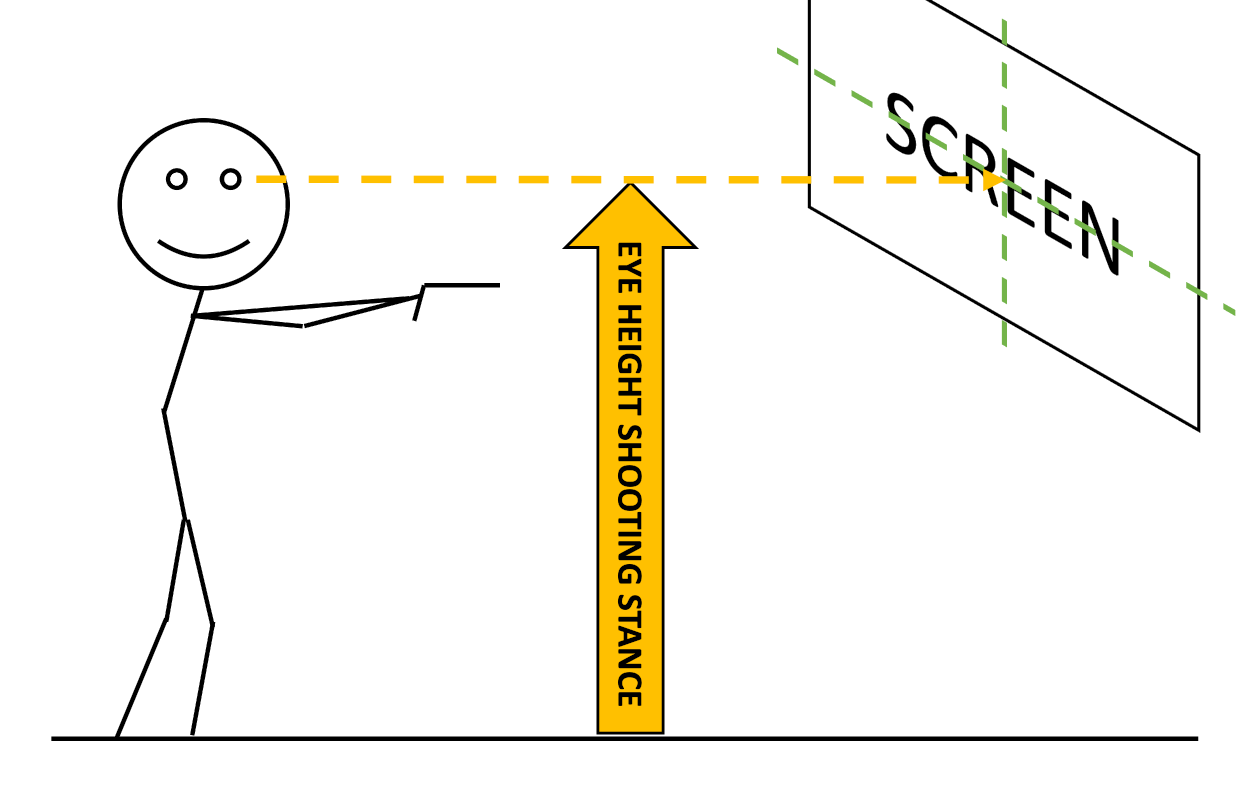 For the best experience switch your browser to full screen (instead of some windowed) mode. The center of the screen is ideally on the same height as the ‘shooter eye height’. In other words, when the shooter naturally looks ahead, the center of the screen is right in front of his face.
Dry firing from a prone position works best when the screen is placed on the ground. If you want to practice long distance shooting, you can put a notebook or a tablet in front of you, since the target silhouette will be small and can fit on a smaller screen. 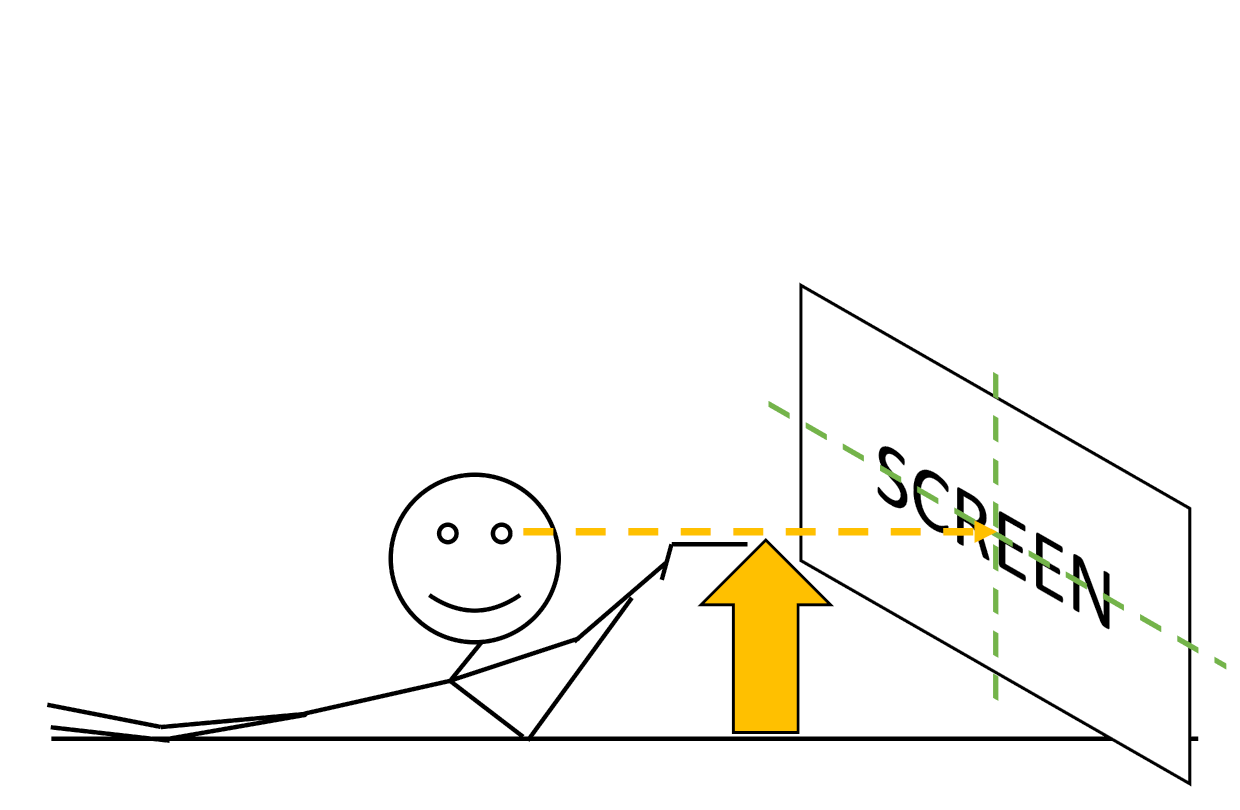 Mechanical offset
Dry Fire Online is a simulator and - just like any other simulators - it suffers from the mechanical offset of your gun. There are some great articles available about this topic here and here, but a picture is worth a thousand words:

There are some ways to deal with the mechanical offset of your gun: We do not recommend zeroing your physical sights on your firearm on the screen distance. 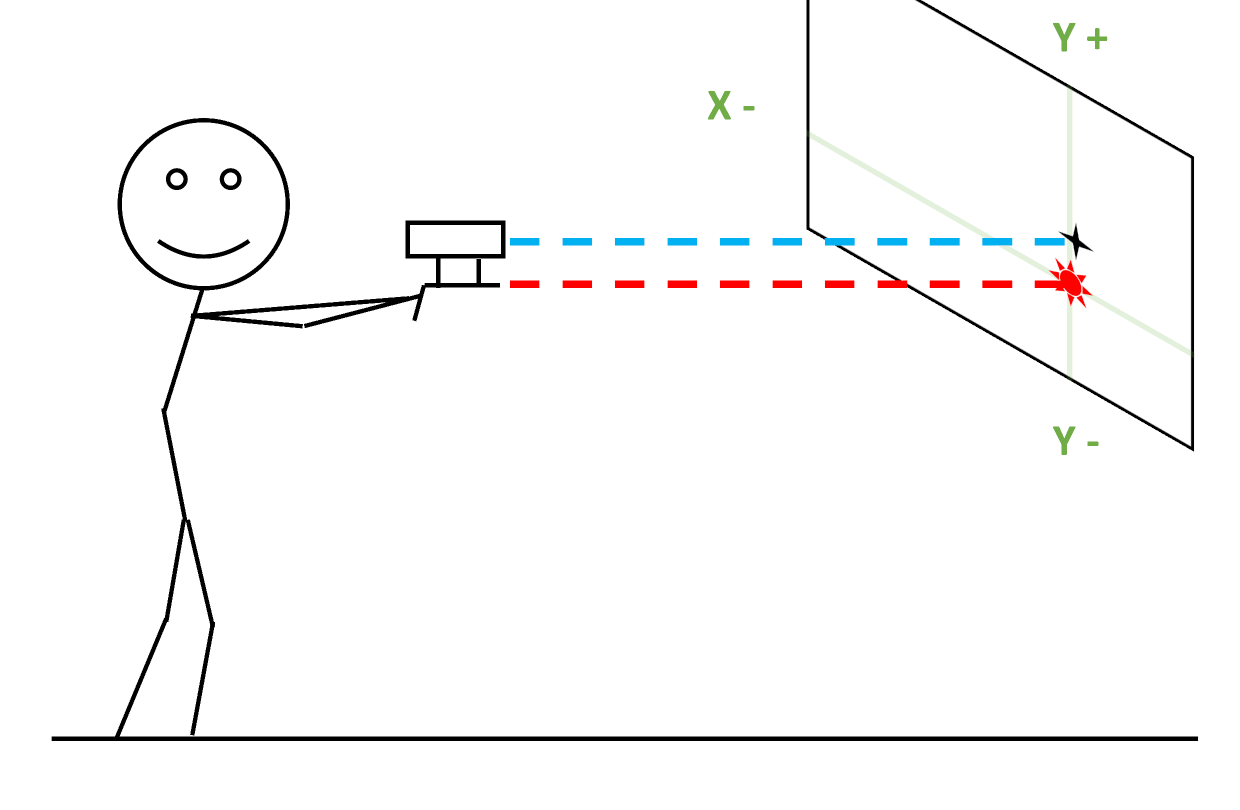 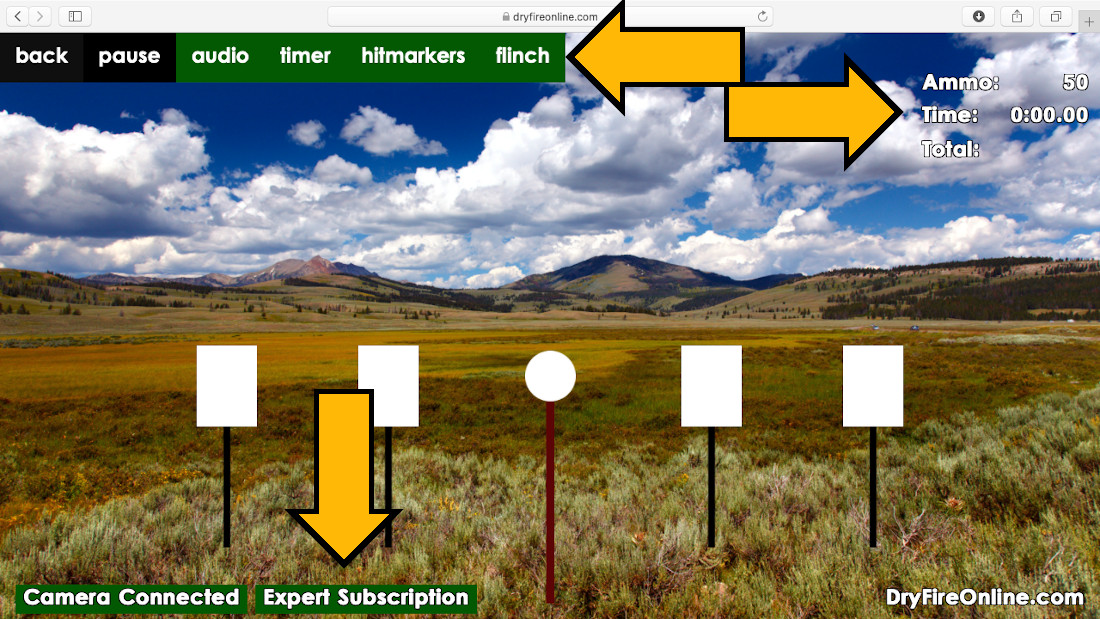 The Toolbar is a row of buttons that influence the behavior of the Range Screen. The Toolbar consists of the following buttons 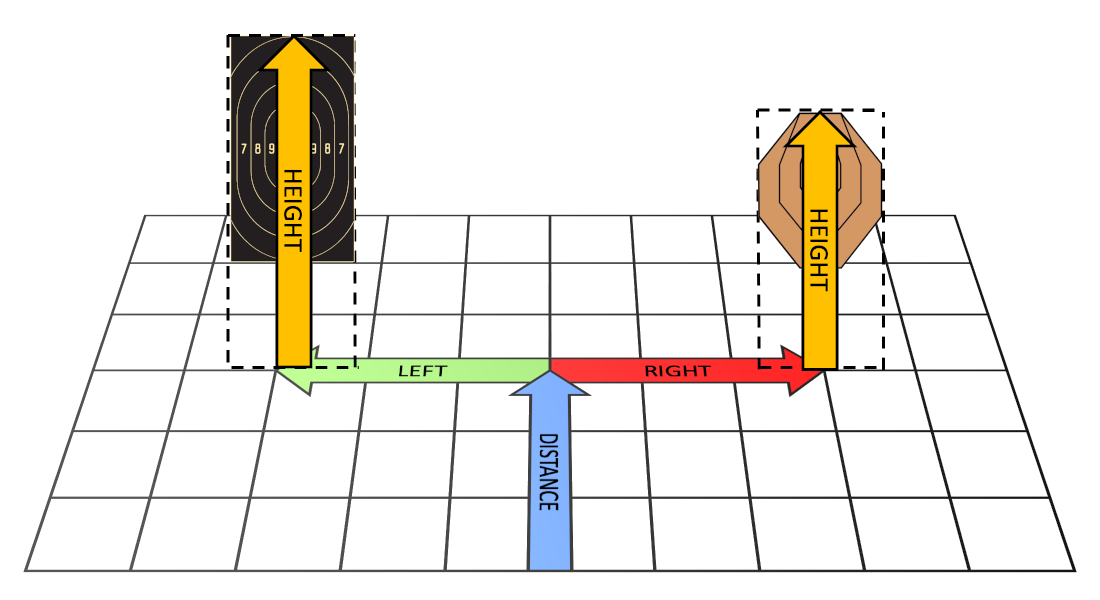 Target positions are defined by 3 parameters: 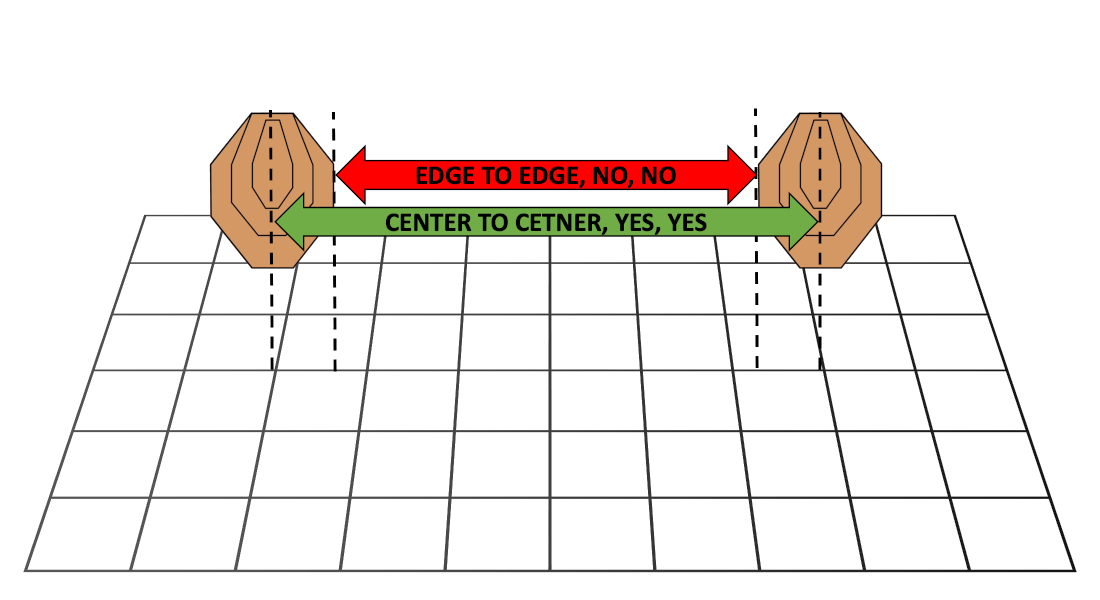 Keep in mind that in Dry Fire Online the targets are positioned by - and the target parameters define - the center of the target. If your stage description defines the relative target distances by edge-to-edge, then you have to transform it to center-to-center distances by considering the width of the targets. In this case it can be useful to change the unit of measure, for instance to define the values in inches instead of feet. 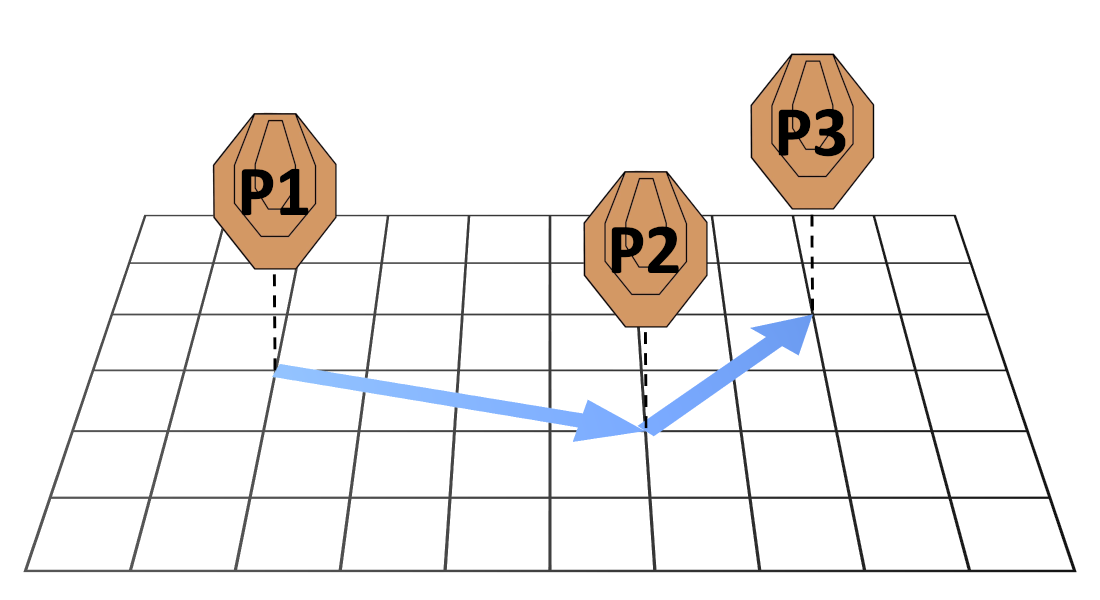 When creating a complex path, you have to consider the Target Expose Time. It is defined in the stage header and it is the upper limit of how long a stage is displayed before the next round. Example: you have a target path with 3 waypoints, each with 10 seconds, means your target needs 30 seconds to reach the last waypoint. If the Target Expose Time is set to 20 seconds, then your target will never reach its last waypoint, since the stage terminates after 20 seconds.

Try it for FREE: Unlimited stages and 2 shots (double tap) per round even without a subscription!

Watch the videos, then read the detailed guide for common mistakes and pitfalls of the calibration process.

Let’s check if you have everything required to train with the Camera App! You need:

There are many ways to set up your Dry Fire Online range, here are a few examples:

1) The tablet range - small and portable 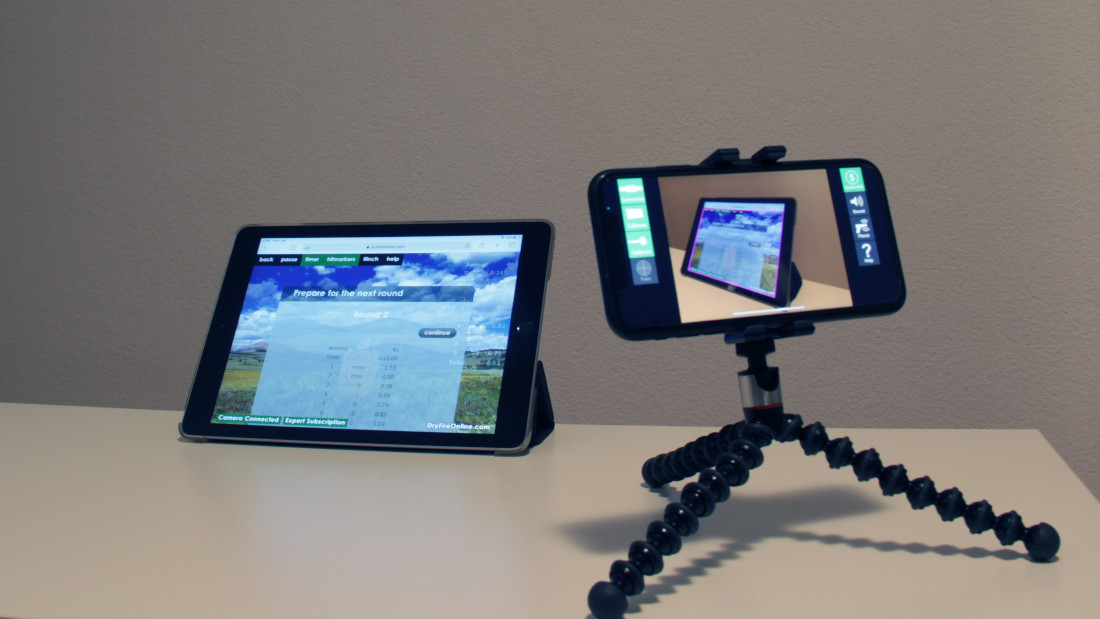 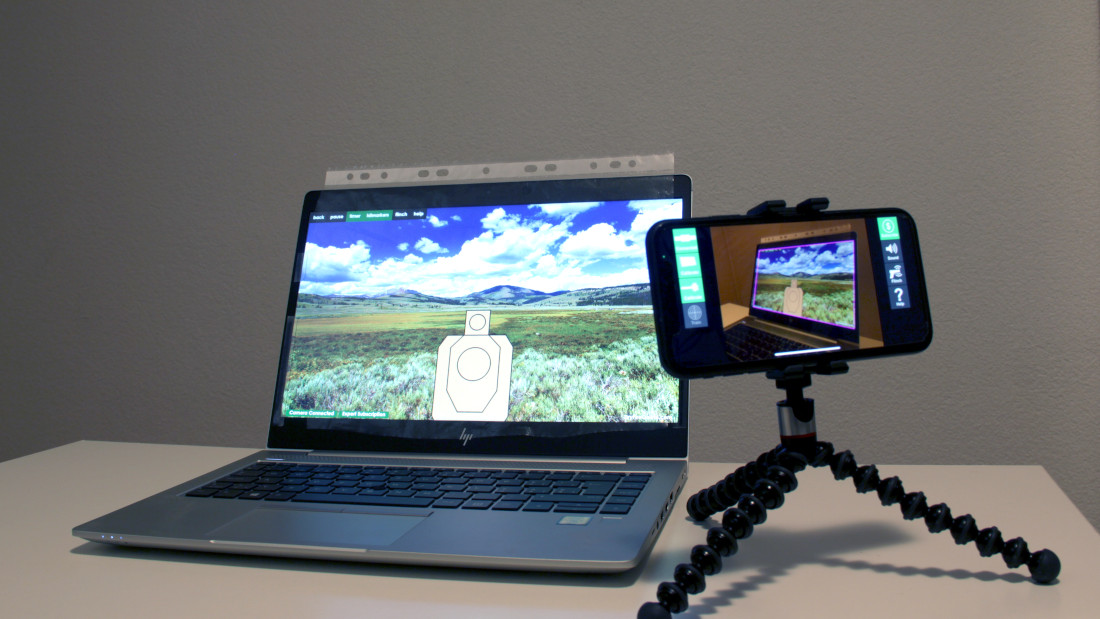 Hey, there is a video about this one: 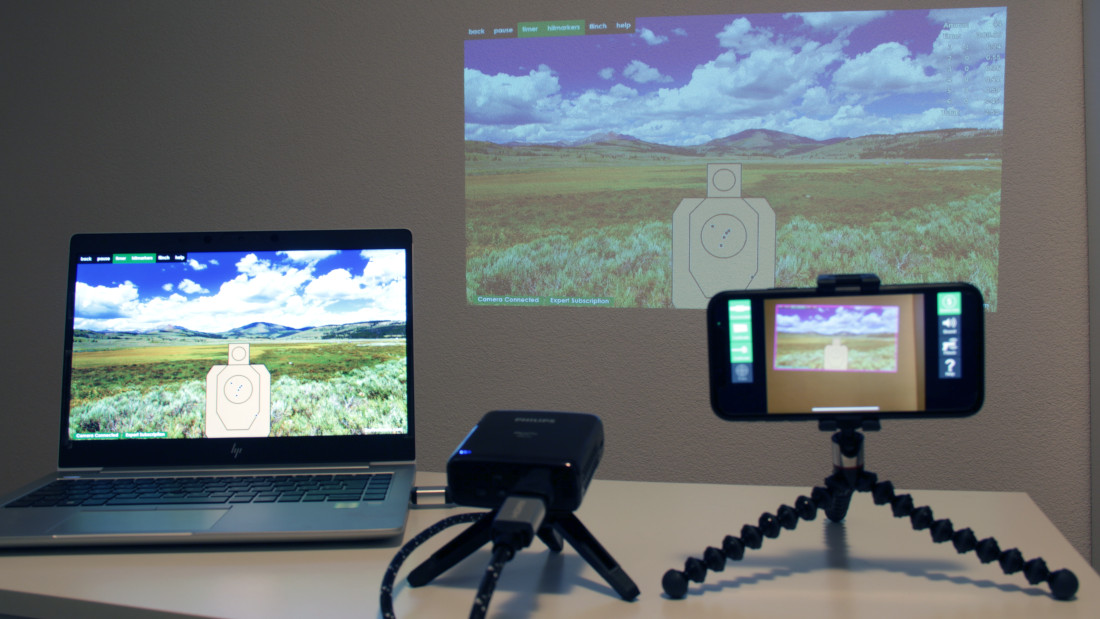 4b) Use your tablet as a camera 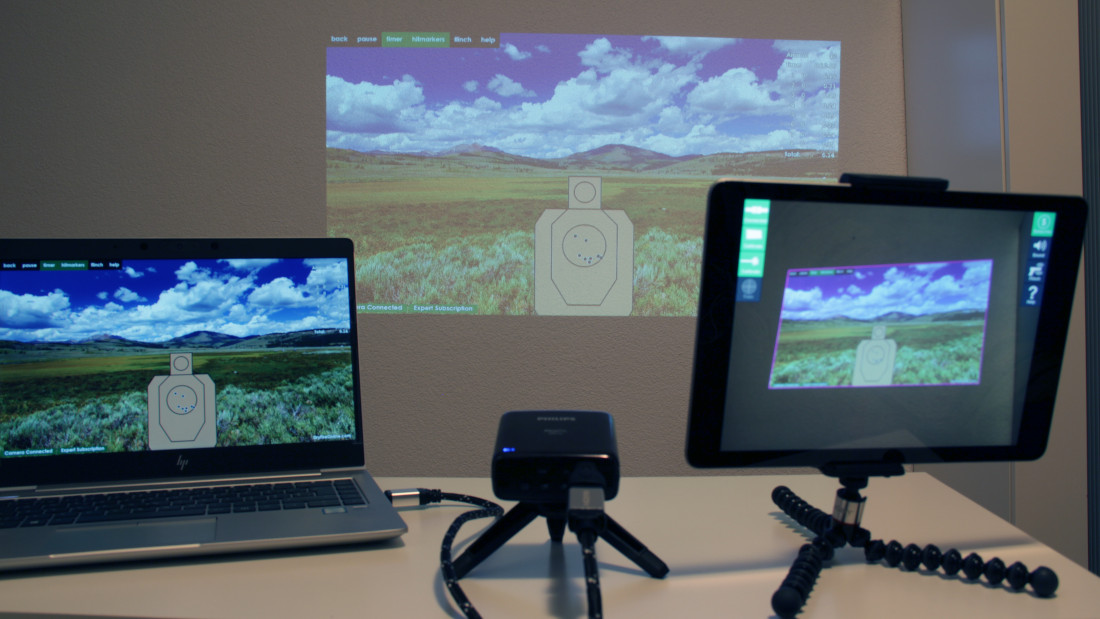 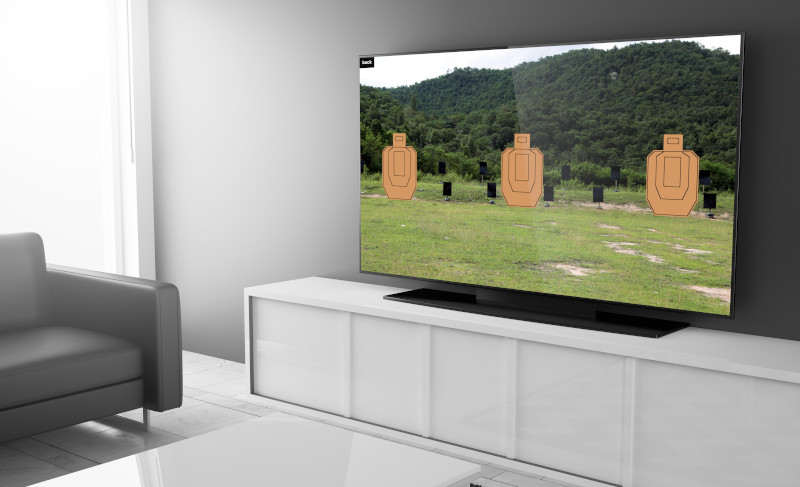 Note that the products mentioned in this section are neither advertised, recommended nor have been tested by us.
Find independent reviews on the internet and choose that fits your needs and budget.

If you want to use the Camera App for laser training we recommend using a projector instead of a flat screen (TV, monitor, LED, LCD, etc) for the following reasons:

Since many of you asked our advice on choosing a projector we decided to write a few words about the projectors we use.

Please note that we are not expert on projectors, and the following is neither a buying advice nor a recommendation of any sort - it's just an introduction of the projectors we have and our experiences with them.

The room where you setup your virtual range has an impact on your experience:

First, connect the Camera App to your training session

You need a subscription to be able to train with the camera app.

Limited offer: Unlimited stages and 2 shots (double tap) per round even without a subscription!


A Free Trial with Free Cancellation is available. Use it to test the Camera App without spending any money. You are free to cancel your subscription before the end of the trial period.


In case you have an App Store Promo Code or Offer Code here is how to redeem it:

In case you do not have a Promo Code continue as follows:

The payment and subscription process including all payments, renewals, cancellations and refunds are managed by your app store: Apple App Store or Google Play without the participation of Dry Fire Online.

In a nutshell: You send the subscription fee to Apple or Google and they forward it to us. Dry Fire Online doesn't see your name, billing address or credit card number.

If you would like to cancel your subscription, you have to take action.

Here is how to cancel your subscription:

In case you need further assistance with managing your subscriptions or you would like to request a refund, please get in touch with Apple or Google.

Screen Calibration means that the Camera App needs to know where your screen is located. Luckily, there is a button for that.

Even tapping hard on the camera screen, or using a makeshift wobbly camera mount can misalign the camera causing precision and detection issues. If you notice that your shots are off, take a look at the camera, and check if the purple frame still aligns with the Range Screen. Here it is already is a bit off:

In this case, repeat the Screen Calibration process.


This is the end of the Quick Setup Guide. If you have reached this point, the Camera App is ready to use.
You can start the stage on the Range Screen.

At the beginning of each stage, the Range Screen displays a special calibration screen and asks the Camera App to perform Automatic Exposure Calibration that is going to set the right exposure levels. Then you are ready to go!

Read the rest of the Manual in case you have issues like:

Exposure Calibration means that the Camera App needs to capture images where the laser dot is recognizable. The captured images shall be balanced and match the current lighting conditions: shall neither be too dark (no laser detected) nor too bright (false laser detected).
Luckily, there is a button for that.

The Scan Grid button changes the density of the laser scanning pattern. The denser the better the detection quality but also makes the scanning slower. You do not need to change this setting unless the "Frame Dropped" warning frequently appears.

The Laser Color button changes the color of the laser the camera app is trying to detect. The default setting is red (for red laser), but it can be changed to green that gives priority of the green RGB component. Note that this is an experimental feature and the Camera App is currently tested with red laser only (since we do not have green laser cartridges).

When something doesn't work
If something does not work, try another browser, and make sure you do not use some old obsolete browser but a recent version. It is a good idea to use one of the well known browsers like Chrome or Safari instead of some lesser-known browsers like Opera. You can also check the System Requirements and the supported browsers.

On the Stage Builder a message appears "If this message stays on the screen..."
In this case something does not work with your internet browser.

Stuck on the grey "Loading" screen
In this case something does not work with your internet browser.

The Pause button does not work
The Flinch button on the Range Screen works only if Flinch Detection is activated even in the Camera App. Check out how the Toolbar buttons work.

The Audio button is missing
The Audio button on the Range Screen apperas only if you have selected some sound effects in the Stage Builder. Check out how the Toolbar buttons work.

Target size is wrong, the target is not scaled properly

No laser detected, hits do not appear on the Range Screen

False shots are detected, even when I do not shoot

Precision is low, my shots are off

What devices are supported?
Dry Fire Online can be used on a number of devices including, notebooks, PCs, devices with an attached external screen or projector, smart TV’s, game console-s - basically device with a built-in web browser and a large enough screen.

Can I see where I hit the target?
You need to use our Camera App to get feedback about your shot placement.

Can I use Dry Fire Online with laser training munition?
You need to use our Camera App to get feedback about your shot placement.

Can I use Dry Fire Online with with scopes? 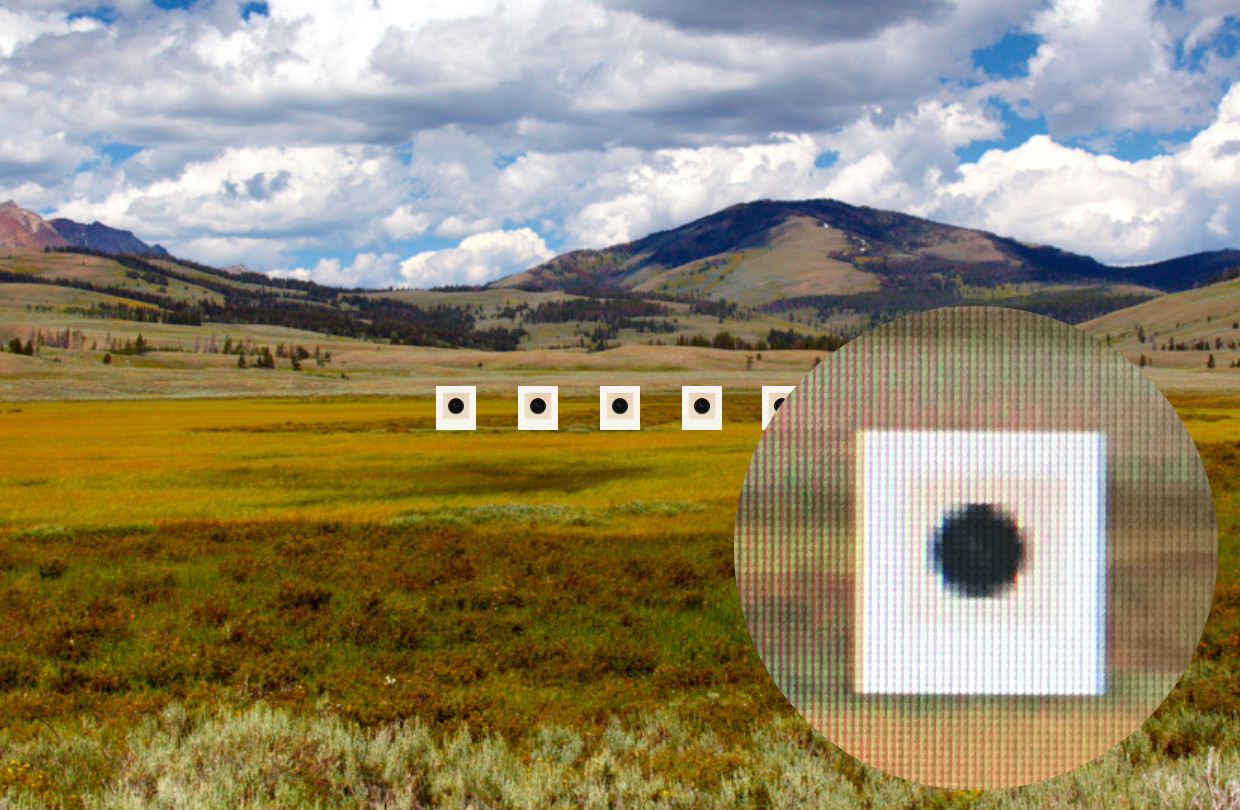 Can I upload my range background photo or target images?
No, you can't. But you can send us a message if you would like us to add an additional target, or range photo to our collection.

Here are some guidelines for safe dry fire practice: For more information consult with your local firearm experts.